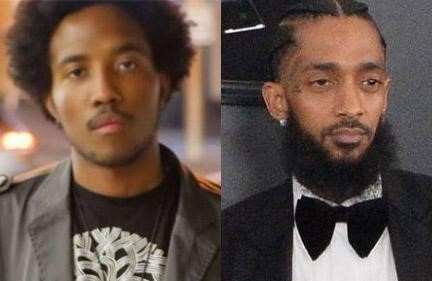 Victor McElhaney, 21, made an impact in his brief life as a young musical prodigy from Oakland who was attending school here at the USC Thornton School of Music.  He gave his heart and soul to music and to his beloved community, mentoring youth and touching the lives of USC jazz faculty and the Bay Area music and faith community. He believed music could “change the world”.  He advocated alongside his mother, Oakland Councilwoman Lynette McElhaney to stop gun violence and create peace in our communities.  Lynette has been a long time friend of NHS, having led the Richmond NHS organization during the early 2000s.

Ermias Joseph Asghedom, 33, known professionally as Nipsey Hussle, was an American rapper, songwriter, entrepreneur, and community activist from Los Angeles. Growing up in the south LA neighborhood of Crenshaw, Nipsey became known for his numerous mixtapes, including his Bullets Ain’t Got No Name series, The Marathon, The Marathon Continues and Crenshaw, He formed local businesses and provided investments into our community like the Marathon Clothing Store and Vector 90, a cowork, cultural hub and incubator space in the Crenshaw neighborhood. While he had a troubled past as a former gang member, he had turned his life around to focus on creating a better, safer community where families could thrive.

Both young men died to senseless gun violence and leave our community void of critical leadership that we need to help improve and sustain our quality of life. What can be done to promote and sustain ‘peace’ in our streets?  Do we have to worry that we may be caught in the crossfire as someone commits a crime? These questions plague us throughout the Los Angeles region and beyond. Our inner cities, in many cases are void of the safe harbor that so many families need to sustain and build generational legacy.

For quality of life to improve ‘in the neighborhood’, we need to have open and honest dialogue about crimes against each other (e.g. black on black crime), why we feel the need to carry hand guns and the future we believe we’re building when children cannot feel safe going to school. None of it makes sense…it’s time we change the narrative, keep the peace and decide that each of our lives is more valuable.  We have to decide that if we know someone who disturbs the peace or we see criminal activity in our community, that we report the crimes to the proper authorities…this then dovetails into us also continuing an open dialogue with our public servants as well.  We shouldn’t fear for our lives with the police either.

We all have the right to feel safe and be safe in our neighborhoods.  We hope you will feel free to join NHS in our efforts to revitalize communities and to advocate so that all voices continue to be heard, and that we don’t lose any more young men or women to senseless crimes of violence.  Rest in peace and power, Victor and Nipsey…you will be sorely missed. – Lori Gay